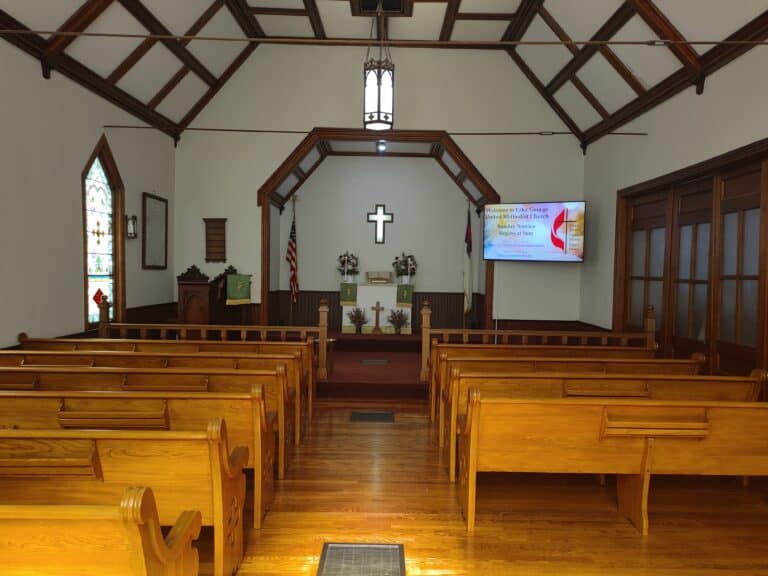 The Lake George Church was formed in the 1860’s

As followers of Jesus Christ our Church  members believe in

METHODISM in our area, according to Conference minutes began about 1860.

An outstanding date in the history of our local Methodist Church is 1884. A Chapel was erected in 1885. The warranty deed was made the 28th of February, 1901.

Henry Worden, a local resident, was the master builder of the church edifice. It was interesting to note that in the early days the only woman to serve on The Board of Trustees was Lillian Burton Lockhart, affectionately known as “Grandma Lockhart.”

Fourteen years later, 1899, the prayer room with the steeple was added to the Chapel. Also new Gothic stained glass windows and new pews were installed.

In 1900 on January 3rd, the Church was incorporated under the name of The First Methodist Episcopal Church of Caldwell. The bell in the church steeple was given by Mrs. Fred Hawley. It had been the bell on the Gage Hill School.

During the pastorate of Rev. Joel Shippey, due to a faulty furnace, the Church was damaged by fire. The quick action of Miss Beulah Brown, a near neighbor, who discovered the fire and called for help, saved the church from being completely burned.

In 1954, the present kitchen was added on. The plans were made by Mr. Edward Ellis, a summer resident, and active friend of the Church, The year 1954 was important also because the Hammond electric organ was purchased and installed.

The members and visitors have enjoyed the fine musical talent of Miss Leona Hogarth at the organ since 1958.

For many years in the 1930’s,  it was the custom for the ladies of the church to hold weekly chicken, biscuit and gravy dinners during the summer season. In more recent years, it has become a tradition to hold the Election Night Dinner and to have frequent bake sales.

Due to the fine response we have had at our Suppers and Food Sale, the United Methodist Women share with you some of their favorite recipes. Click here to read the cookbook

Like many churches Lake George UMC started to see a decline in membership in the 80’s and 90’s. The beginning of the 21st century proved to be a challenge to keep the doors open. Church attendance began a steady decline but spirits remained high enough to keep the church active in the community. Around 2016 the popular dinners begin to drop off and only election day dinners were served and by 2017 dinners were no longer served. In 2017 church attendance  was down to 3-4 people and the lack of resources to maintain the building were very evident. There was talk of closing the church but our Pastor Nellie Hintz ensured our spirits still remained high and we continued to worship and praise God each and every week.

Still lacking revenue to keep up with building maintenance and financial requirements for the Upper New York Conference, in April of 2018, Hidden Treasures By The Lake was born. This gently used clothing ministry provides clothing at $1 and $2 and free if needed. We pledged to give a portion back to the community while using the remaining portion to better secure the finances of the church.

2020 came with much uncertainty. It was the year of COVID, churches actually closed their doors to in-person worship. Zoom became the way to worship together remotely. In July we had our first in-person service with Pastor Tom Albrecht. A new level of worship and prayer was introduced. We went from worrying about the future of the church to living in the now and giving it to God to make his will be done.

Through much prayer and decrement to what God wanted us to do things began to happen. The way we conducted our church service evolved to a post COVID version that eliminated paper and reduced person to person contact while allowing for in-person worship. The Holy Spirit really began to grow among the members and church attendee’s. People began to watch our live stream and YouTube messages. Hidden Treasures By The Lake experienced growth and opportunities to minister to those seeking answers or comfort. Prayer was no longer something we talked about, Prayer is something we do and do often.

The fall of 2020 began the transformation of God’s House of Worship. What began with worship, prayer and decrement was now visible by all. By November Lake George UMC was no longer a drive by church. A new front porch and back covered entrance along with new siding on the entire church were added. People began to stop and wanted to see what was going on. Some even commented that they drove by because they were looking for the old run down building. Improvements made in 2020

Our church building has seen a lot of change in the last 136 years and attendance varied over the years but the one constant was God’s Will. Lake George United Methodist Church is living proof that when we give it to him, he will provide. Over the next two years, 2021 and 2022, God’s love poured down upon us more than we could have ever imagined.

2021 was another year of change. In January our once dormant bell began to ring again. In the spring we installed a new railing on our front entrance to better assist people with getting up the stairs. Our goal for 2021 was to make our building fully handicap accessible but COVID has delayed but not stopped this plan. A new sign was also installed in the front of the building. proof again that prayer works.

In 2021 we also renovated our sanctuary with new carpeting, prayer rail, refinished floors and pews. We added some padded chairs to help provide comfort for those that could not sit in the wooden pews. We had our first wedding in over a decade. There was always a special feeling when you walked into the sanctuary but now it feels much more special. We learned that God’s work is not done yet.

August of 2021 Lake George United Methodist Church used air conditioning for the first time in it’s 137 year history. Over the summer the basement had extensive work done to provide a concrete area for the installation of a  new furnace and a/c unit and new hot water heater.

Our most recent change was in July of 2022. The next step in making our building fully handicap accessible. To enable us to install a wheel chair lift we needed to put asphalt down in our parking area. We can park 10 to 12 cars, have a handicap parking area and can now move forward with adding a lift.